The Need for People to Be There

Islam is not an easy religion to convert into.  It is ironic that although Islam as a faith is an easy religion, the circumstances of the current socio-political climate and especially the Muslims themselves do not make it easy.  We have a lot of self-styled da’wah gurus with their pictures of the latest trophy convert.  But there is not a lot of follow-up.  Muslims are not calling people to Islam; they are calling people to whatever mistaken ideology they subscribe to.

There is a need for people to be there.  And there should be an organised “Be There” Programme to have a support network that will be there when these challenges inevitably manifest themselves.  And this will happen after conversion.  This should be an independent initiative to follow-up with the people who attend the classes, the new Muslims, the non-Muslims and also the lapsed Muslims.  Although not every non-Muslim who attends a class will convert, the fact that they are attending the class in the first place means that they are probably considering it.  It is only proper.

The main purpose of such a programme is to provide a supplementary social network for the mu’allaf.  They must feel that they are not alone.  They must have the confidence that the volunteers have the experience and the empathy; that they have literally been there, done that.  Confidence is infectious.  In short, we are engaged in rudimentary social engineering.

One of the issues that we need to address is fixing the social support network, repairing the relationship with the family.  Many Muslim organisations around the world make the hardline mistake of encouraging the convert to break away from their ‘kuffar’ family and friends.  This is how cults operate.  This is not the sunnah of the Prophet (s.a.w.).  He spent a lot of time trying to repair that relationship by the best of manners, and in doing so, call them to Islam.

Normally, the dialogue regarding those who embrace Islam is focused on why they converted.  This is very much a feel-good exercise for the community at large.  When someone converts to Islam, the immediate response from the Muslim community is overwhelmingly welcoming.  And then, they are forgotten.  We need to move away from that shallow dialogue to a deeper understanding.  Much more is learnt on why people stay Muslim.

The shahadah is just two lines.  It is the declaration of the Unity of Divinity and the acknowledgement that Muhammad (s.a.w.) is the final Prophet and Messenger of God.  But it elicits an entire change of worldview and all its ramifications.  Whatever the reason, the conversion is not an event.  It is a process and it may be a long, lonely one wracked with doubt, challenges and alienation from the things that once brought comfort.

The main reason why converts leave Islam is a failure of the social network.  When someone converts to Islam, they face a distancing of their relationship with their parents, their family and their friends.  Added to that is pressure from the Muslim side to ‘conform’ to their idea of what Islam is.  People have lost their jobs, had custody issues with regards their children, and been subject to emotional blackmail and abuse.  To the non-Muslim family, this looks like a painful rejection of family and cultural values for the other.

There are many Muslim converts who leave Islam on a daily basis for various reasons.  For some, they declare their apostasy and they become a counselling case and later a statistic.  But there is a larger number that have simply stopped practicing or were never practicing.  Perhaps faith did not take root or perhaps they simply stopped believing.  It may be the lack of education and that is an affliction of the Muslims in general.  It may be nostalgia for their pre-Islamic lifestyle and friends and a desire to restore that relationship with the family.  But there are legitimate doubts regarding the religion itself, oft times due to the examples of Muslims around them.  It is easy to say that there is a difference between Islam and the Muslims, but it is difficult to reconcile.  There is much to criticise about the Muslim community and institutions.

People come to Islam thinking that the crisis of faith will finally be resolved, and they will finally have all the answers.  Truth be told, the Muslims themselves do not have that.  What they have been given is actually the correct questions.  The answers themselves come eventually through trial and tribulation.  Why it was so difficult to be a Muslim?  How else could we begin to understand the tremendous Gift we have Received from God?

Muslims wittingly or unwittingly pressure those who have embraced Islam to leave all that was of their cultural and social identity and conform to the expectations of the ethnic majority be it Arab, Indian, Malay or others.  But Islam was never about that.  This only deepens the sense of alienation and loss.  And it becomes a barrier for those who might otherwise consider the Truth of Islam.  As a result, many converts suffer from an identity crisis in one sense or another.

Converts tend to have similar stories in their personal journey to Islam.  No matter the different backgrounds and events may differ, the personal struggles and questions about faith and God and existence are the same.  They are universal questions central to all of us.  In that, it is important that the people that brought them to Islam, that are the witnesses to their conversion and are there understand this and work together to help those who have come along and, in the process, enhance their faith.

There are many challenges facing the Muslims, but the convert is assailed with the requirements of “shari’ah”; not the shari’ah of Islam, but the shari’ah of the imagination of small-minded people.  Music is suddenly problematic.  Facial hair is a serious issue.  The type of clothes, whether it is permissible to greet the family during festive events, attendance of family functions, photographs, clothes, meeting people of the opposite gender, circumcision, myriad political events in other parts of the world are all suddenly thrust upon the convert.

The Prophet (s.a.w.) did not call people to Islam by talking about the Law.  He appealed to the soul.  It was spirituality that brought most people to Islam.  It was love of God, love of the Prophet (s.a.w.) and love of his ummah that allowed that faith to take root and flourish.  The average convert is inundated with information by Muslims and not facts.  That information is tainted with prejudice, ignorance and arrogance.  He is bombarded with labels: Sunni, Shi’a, Sufi, Salafi, Hanafi, Shafi’i, Asha’ari, Qadiyani …  All that matters is Islam.  Nobody embraced Islam to take sides. 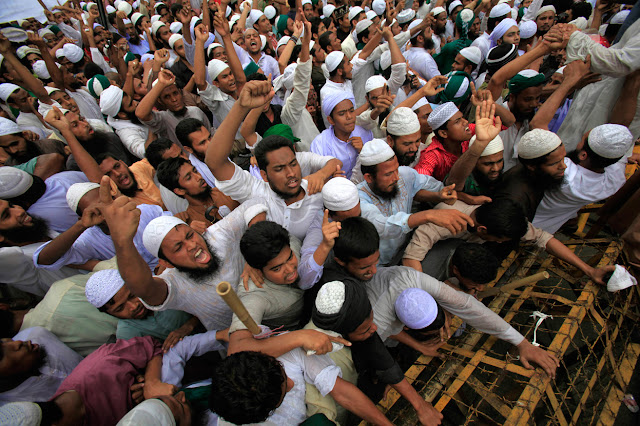 And for those who fear Allah, He (Ever) Prepares a way out.  And He Provides for him from (sources) he never could imagine.  And if anyone puts his trust in Allah, sufficient is (Allah) for him.  For Allah Will surely Accomplish His Purpose: verily, for all things has Allah Appointed a due proportion. (Surah ath-Thalaq:2-3)
This verse is the affirmation that the one who recites finds sufficiency in Allah (s.w.t.) only.  The story behind the verse, is that there was once a poor man working on a ship who received this verse from Khidhr (a.s.).  By the constant recitation of it, he became wealthy enough to be a king.  There is no independent verification of the story.
Mu’Alim at-Tarimi Shaykh Zakaria ibn ‘Umar Bagharib (q.s.) was from a family of scholars noted in their knowledge of the Qur’an and the secrets of it.  Shaykh Zakaria Bagharib (q.s.) used to say this verse should not be called the “Verse of 1,000 Dananir”; it should have been called the “V…
Read more 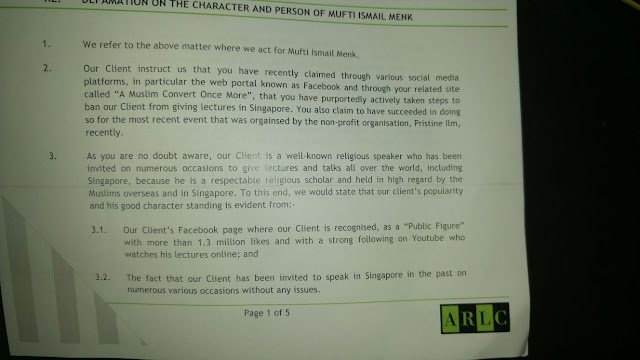 بِسۡمِ ٱللهِ ٱلرَّحۡمَـٰنِ ٱلرَّحِيمِ
After Ismail Menk was banned from public speaking in Singapore, his lawyers, who I assume are quite new to this defamation business, sent me a laughable letter demanding some sort of response.Naturally, since it is in my good nature, I responded comprehensively.
Please find below, Ismail Menk’s lawyers on my alleged defamation.


This here, is my response.Special thanks goes to my in-house counsel, Zafirah Jeffrey, for the hard world of summarising my sixty-three articles into this.This is different from the format I sent out.
Regarding the defamation on the character and person of “Mufti” Ismail Menk, I refer to your letter, dated 10th December 2015, in regards to the supposed defamation of your client, Ismail ibn Musa Menk. I acknowledge as well as point out several erroneous claims on your part in regards to the matter. The premise of this letter is based on the presumption that the addressee already knows the basics of Wahhabism in terms of its prin…
Read more